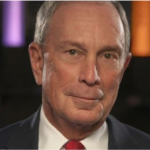 “Fifty years ago next month, the Apollo 11 lunar module touched down on the moon. It’s fair to say the crew never would have gotten there without MIT,” Michael Bloomberg told the assembled at MIT’s commencement ceremonies this month. “I don’t just mean that because Buzz Aldrin was class of  ’63 here and took Richard Battin’s famous astrodynamics course…the Apollo 11 literally got there thanks to its navigation and control systems that were designed right here at what is now the Draper Laboratory.”

Bloomberg’s compelling address was packed with perspectives about history and science, leading to blunt observations about the race to combat climate change—and an announcement that he is putting his money where his mouth is. He revealed that his foundation Bloomberg Philanthropies, which has been working for years to rally cities, states, and businesses to get serious about climate change, is committing $500 million to the launch of a new national initiative called Beyond Carbon. The goal: to move the U.S. toward a 100 percent clean energy economy as expeditiously as possible. “We intend to succeed,” he added, “not by sacrificing things we need, but by investing in things we want: more good jobs, cleaner air and water, cheaper power, more transportation options, and less congested roads.”

An immediate and inescapable challenge
Climate change, he noted, is today’s equivalent of the man-on-the-moon challenge—but with greater consequences—the future of humanity. “Our most important and pressing mission…is not only to explore deep space and reach faraway places. It is to save our own planet, the one that we’re living on, from climate change.”

He told the audience of graduates and their families that scientists and technologists have already pioneered the technology to tackle climate change—to power buildings with solar and wind power, to power vehicles with batteries charged with renewable energy, and to power factories and industry using hydrogen and fuel cells. He added that such innovations don’t require an economic sacrifice. “Just the opposite, these investments, on balance, create jobs and save money.”

The question he posed to the commencement audience: “Why the hell are we moving so slowly? The race we are in is against time, and we are losing. In the past decade alone, we’ve seen historic hurricanes devastate islands across the Caribbean. We’ve seen ‘thousand-year floods’ hit the Midwestern and Southern United States multiple times in a decade. We’ve seen record-breaking wildfires ravage California, and record-breaking typhoons kill thousands in the Philippines. This is a true crisis.” Scientists, Bloomberg said, understand that there can be no delay in taking action.

In response to those who believe that climate change is only a theory, he quipped. “Yeah, like gravity is only a theory. People can ignore gravity at their own risk, at least until they hit the ground. But when they ignore the climate crisis, they are not only putting themselves at risk, they are putting all humanity at risk.”

Learn more about Bloomberg’s speech and his plans for Beyond Carbon.